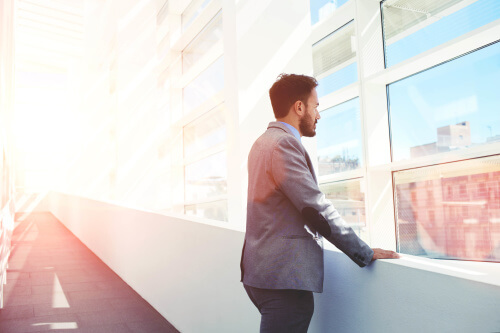 So, what made the difference? And what differentiates young aspiring leaders who are destined (or doomed) for success from those who are merely smitten by ambition?

Talent is necessary, of course, but roadsides are littered with the dashed dreams of timid souls whose talents were squandered.

And burning desire is another necessary quality, but merely wishing for achievement seldom confers it.

There are bookshelves full of paperbacks with advice for the enterprising: come to work early and leave late, find and flatter one or more mentors, and cheerfully take on thankless tasks.  These are so ubiquitous as to have almost become clichés. But clichés usually become clichés because they contain some nugget of truth. So, the young and upwardly mobile should take heed: Hard work is necessary, mentors are important, and commitment to the organization will be noticed and rewarded.

But leadership involves not just one’s own strengths and virtues but also the capacity to lead others. And that requires judgment, sensitivity, and understanding. It also requires a purpose beyond gaining position and prestige.

It’s the vanity of seniors to think that only hard-earned experience matters and that youth brings only undisciplined enthusiasm and sweet innocence to the complicated business of leading. And it’s the vanity of youth to think that fossilized ideas and wearied thinkers remain hopelessly trapped in a dim and distant past and that only fresh ideas and bold action can lead in a brave new world. Both conceits have some plausibility.

Age doesn’t necessarily confer deep wisdom, and youth doesn’t necessarily add creative energy. But experience does matter and fresh vision is an asset to leadership trials. The challenge for the young is to balance knowing how to benefit from the experiences of elders while at the same time offering innovative thinking.

3. TEMPER EAGERNESS FOR CHANGE WITH RESPECT FOR OTHERS

One useful insight is that while it is the duty of the young to show up brimming with ideas for new approaches, new products, and new directions, an undisciplined enthusiasm for change can easily become arrogance and conceit. History does matter, and understanding it is a prerequisite to sound judgment and wise leadership.

Nick Wagner, recently appointed director of institutional research at Saginaw Valley State University, figured out that before rushing headlong into change he should first try to understand how things got to be the way they are. After all, someone had decided to do things that way and perhaps had a good reason—at least at that moment in time. He advises to “remain cognizant of the fact that employees invested a lot of time” to create things, and to “be sure to understand that unintended consequences could negatively impact the organization.”

He also advises: “Become someone who takes time to listen and invest in conversation with everyone throughout all levels of the organization. Make it a priority to learn about others, not just professionally but personally.”

It’s too easy to see flaws in the status quo: inefficiencies, outdated approaches, and chaotic processes. But the people who invented that status quo deserve respect. And it may well be that, however illogical or untidy, what is being done does, in fact, really work.

Mature leaders understand what needs to be changed and why. And as the old Vermont saying goes: “If it ain’t broke, don’t fix it!”

In a rush to get ahead, one may succumb to self-absorption, neglecting the human and humane aspects of leadership. Successful leadership requires followership, and followers are complicated creatures who need and deserve empathy and care.

The Rev. Christopher Pryor was thrust into a position of leadership at a time and for a reason he deeply regretted. His father, Bishop Marvin Pryor, passed away suddenly, leaving responsibility for leading Saginaw’s Victorious Believers Ministry to his son. But he had listened and learned from his father, and the lesson he most values now is the singular importance of relationships with those he serves. That’s because it’s hard to lead reluctant or resentful followers—or to lead with no followers at all.

Pryor found that “as a young leader, you are pulled in so many different directions. For me, it was learning how to prioritize when every situation is presented as a top-level situation.” The first priority should be clear: establishing relationships with people. “Relationship-building is an art that must be intentionally nurtured, cultivated, and protected. Develop authentic and deep relationships with the people…who will support you,” he says.

A leader’s followers are taken for granted only at great peril. Knowing where you want to go is important, but every now and then look back to see whether someone, anyone, is following.

5. DEVELOP A HABIT OF REFLECTION

For the would-be leader, an understanding of history and people can be a critical difference-maker. But so, too, is developing a habit of serious self-analysis and sober reflection.

In the fast and furious day-to-day, it is tempting to react hastily—and thoughtlessly—as individuals, issues, and ideas appear and flee. Granted, patience is sometimes an overrated virtue, but constantly reacting to problems and problematic people is rarely a winning strategy.

Strategy requires focus and concentration. Will some decision or action really achieve the desired outcome? What is to be accomplished at a meeting and how can things move in that direction? What will motivate some person to work harder and do better? Did we make a mistake, or are we missing some lurking threat or hidden opportunity?

Josh Ode, new to his role as associate provost at Saginaw Valley State University, decided to discipline himself to set aside some time each day for self-reflection. He says that this “has helped [me] to better understand the reason for success or failure…and has also helped me to recognize my mistakes and create mechanisms to not make the same mistake twice.”

But this habit takes time, and honest reflection takes a touch of humility, too. It’s easier, of course, just to trust one’s own instincts and never look back. But that relies on luck, and over time, the odds are not favorable.

Conventional wisdom says the best time to risk mistakes is early in a career, when there is still time to recover from youthful missteps and misadventures. But there are two kinds of mistakes: those that result from trying too hard and caring too much and all others. The former are often even encouraged by wise employers. The latter may do critical damage to hopes of advancement.

Jeff Martin, now public affairs associate director for The Dow Chemical Company, joined Dow after an early career in politics, working for a former Michigan governor. He confesses now to naiveté: “It took me a time to adjust to the stark reality that a company actually hired me for my skills and had expectations that I would use them.” One of his “greatest mentors” advised him to “take chances and become an expert at something.”

“At first, I really didn’t understand how I could become an ‘expert’ in anything until I took on a special global project. This allowed me to lead an effort that exposed my abilities and inevitably made me a ‘go-to-guy’ around the company,” Martin says. “This advice paid off and has resulted in multiple opportunities, international travel, network growth, and enhanced capabilities, and has empowered me to develop leadership skills I would have never thought possible.”

Martin and others who have moved ahead have almost always said yes to opportunities, even if the timing seemed inconvenient or the direction seemed fraught with hazard. Opportunities do not always present themselves precisely as we wish or when we feel ready, but once foregone, they may not appear again. And the saddest lament is this: What if I’d had the courage to have taken that less-traveled road.

Perhaps an important consideration for those starting out on a path to leadership is the “why” of it all. The most important quality of those who should lead—those who will truly matter—is a commitment to things more lasting than the moment and larger than oneself.

There are lots of wannabe leaders who are primarily narcissistic. They seek positions to satisfy their egos. But self-absorbed ambition disappoints eventually, and it won’t likely inspire followers either.

There’s nothing wrong with struggling mightily to achieve a high net worth and low golfing handicap or some other temporary gratification. But, as the old song goes, “is that all there is?”

Napoleon once said: “A leader is a merchant in hope.” Consequential leadership—leadership that summons the best from followers—demands a larger purpose. It may be creating meaningful work for people, developing a product or service that will improve lives or communities, standing bravely for an important principle, or maybe doing something altruistic, even wildly idealistic.

8. GLIMPSE BACKWARD TO SEE AHEAD

An uncommonly thoughtful graduation speaker once began his address with this: “It’s never too soon to think about how you’ll want to be remembered.” He was reminiscing at career’s end with some pride and some regret. The youthful graduates were at first annoyed. They were there to be praised and celebrated at the onset of their own bright futures. But as the speech went on, this theme became a haunting perspective: Everything we do eventually does build to what we become. In the end, your work should mean something to someone.

Jenee Velasquez, executive director of Herbert H. and Grace A. Dow Foundation, puts it this way: “Make your life matter by being useful. Each of us has more blessings than we realize.”

Leadership that matters isn’t about the envy or adulation of others. It’s about leading to accomplish things for which one may wish to be remembered at the end of the day. That’s what really distinguishes aspiring leaders who will matter from those who are merely ambitious.

And then it just may be that others will wish to follow. •