As the hosts of the morning drive-time show “The Morning After with Matt and Adam” on Z93 (WKQZ-FM), Matt Bingham and Adam Shilling make the a.m. commute a little more tolerable for legions of motorists.

They are two of the Great Lakes Bay Region’s most popular carpool passengers.

As the hosts of the morning drive-time show “The Morning After with Matt and Adam” on Z93 (WKQZ-FM), Matt Bingham and Adam Shilling make the a.m. commute a little more tolerable for legions of motorists. Early risers across the region have come to count on the pair as old and familiar friends who provide a daily dose of humor to begin the day.

“We kind of picture us as just two guys kind of goofing — sitting at the bar watching the football game or maybe they’re in the mancave having a good time goofing on each other,” Shilling said. “Occasionally it’s potty or toilet humor, but that generally appeals to guys. If we sound like we’re having fun, then the audience is having fun right along with us.”

The show’s target audience is men ages 25-54, but Bingham said “The Morning After” tries to make itself accessible to listeners outside that demographic.

“We like to think we do a pretty good job appealing to as many people as we possibly can,” he said. “I think when it comes to the humor of show, it sounds like we’re having fun doing it. We have a fun job, and we don’t take that for granted. A lot of people that listen to us are going to jobs that they might not be big fans of. They’re getting up early. The last thing I would want to do is get in my car and listen to people complaining about their lives.”

Bingham and Shilling have partnered as co-hosts since 2016, but their friendship stretches back much further. Shilling has been at the station for 21 years, starting his first midnight shift at Z93 several hours after graduating from the Specs Howard School of Media Arts in Southfield. Bingham came to the station through an internship in 2003 and worked his way up doing weekends and night shifts. Bingham was laid off due to budget cuts in 2011, but he returned four years ago to help host “The Morning After” as well as serve as the station’s program director. 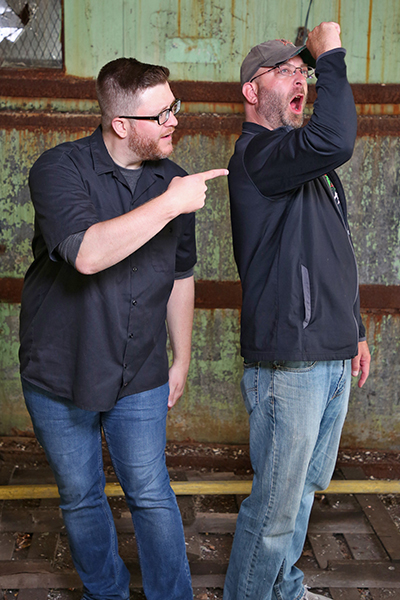 “Even when I moved away, we would still text each other random dumb stuff,” Bingham said. “It’s something that’s been built into the years we’ve know each other, and to finally get to work on the air together, it’s something that we realized worked.”

“We also both have adolescent senses of humor, which works. It just seems comfortable,” Shilling added.

That on-air chemistry and camaraderie helps form a connection with listeners.

“It’s all incredibly dumb stuff. I don’t know if there’s a formula to it. If we think it’s funny to us, we’ll go with it,” Bingham said. “If it catches on, we’re saying it again two years later.”

“If you have a group of friends who have been around each other for a while, they all have this thing — a running joke or something your friend did five years ago that you’re always bringing up and goofing,” Shilling added. “That’s what happens on our show. We hit upon something that’s funny or silly or a sound effect, and we’ll just continue to use it. And the audience feels like they’re a part of the show because they’re familiar with it and they start using it in their own lives to irritate their other friends who are fans of the show.”

With the national health crisis, civil unrest and political divisiveness in the country, Shilling said a bit of an escape through humor is needed by many.

“But we have taken a couple of days in the past few months where we didn’t do what we normally do because it didn’t feel right to try and make people laugh,” he said. “We did it after the floods in Midland and Edenville and Sanford. Those were devasting things happening in our area. The day or two after that, we just had to stop and say today is not the day to try and be goofy. We’re both kind of proud of those days and how we could transition the show.”

“It’s important to be able to talk about these things because they are affecting us as well. We want to be media that is local and relevant to what is going on,” Bingham added.

Funny or serious, what people hear on the show is genuine and sincere, Shilling said. Trying to fake it would take the fun out of it, he said, so the personalities that come across on the air are the same personalities the duo have in their off hours.

“Without the curse words,” Bingham joked.