Billed as the world’s largest Christmas store, the trip to Bronner’s has become a family tradition for many guests looking for unique and personalized gifts and decorations.

Growing Up a Bronner Has Its Perks

Getting the chance to go to work for the day with Mom or Dad presents a golden opportunity to briefly explore a world of unfamiliar and exciting terrain — the echoing chasms of an empty board room, the manned velocity testing of unrestrained wheeled office chairs, the archeological digs for the unearthed treasures of a well-stocked supply closet.

“Some nights when my mom was at choir, I would go to the office after hours with my dad,” said Maria Bronner Sutorik. “I’d either get a chance to play secretary with a typewriter, or cashier with an adding machine and cash register till complete with play money. There was plenty of chance to play store. Sometimes we’d go to the sign painting shop behind the office and I’d get to paint or draw on the artist easel boards.”

Such adventures for a child are a bit akin to the magic, wonder and eager anticipation only experienced on Christmas morning. However, that analogy hit much closer to home for the young Sutorik. Instead of just any nondescript office building, her parents had the run of a place where Christmas is celebrated 361 days each year.

Yet beyond pure exploration, those early days also served as a sort of apprenticeship for Sutorik, who eventually joined the family business and now serves as vice president for Frankenmuth’s fabled Bronner’s CHRISTmas Wonderland.

“In 1977 the three stores consolidated to one location at Christmas Lane, and soon after that is about the time I earned my first paycheck,” she said. “I was able to work in various divisions over the years. In the office I worked with data entry, mailings and answering phones. I also worked as a packer at checkout and eventually a cashier, as a store clerk in the gift department and also doing centerpiece assembly. I was even an Easter Bunny helper. Working in a variety of areas allowed me to get to know a lot of the staff, have some freedom of creativity, understand nuances of various departments and also a chance to interact with the customers.”

“My father, Wally Bronner, actually started as a sign painter and window trimmer, and counts 1945, his high school graduation year, as the start of Bronner’s,” Sutorik said. “An opportunity came along when trimming a window at Jennison Hardware in Bay City, when officials from Clare, Michigan, asked the hardware store owner where they might possibly purchase some municipal Christmas decorations. The owner, having none, referred them to the window trimmer. My dad did a bit of research with various cities and determined there would be a market for such decorations, and he produced the first Christmas light pole display panels for Clare.” 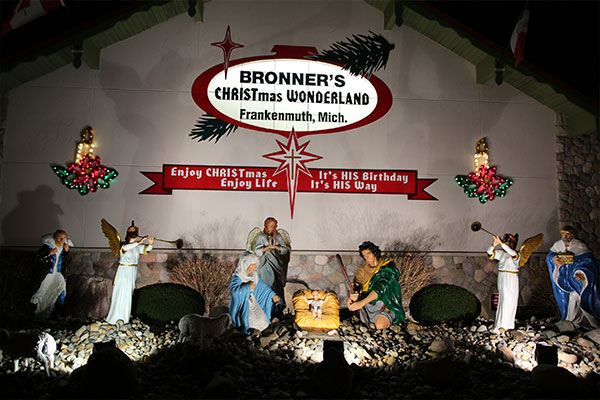 Although Bronner’s boasts more than 2 million annual visitors today, the post-Thanksgiving season may be the most hectic time of the year for staff; however, making the magic of Bronner’s come to life as a special event for guests is a year-round endeavor.

“The buying cycle for Bronner’s happens mainly from October through July with various travels and trade shows domestically and internationally in a normal year,” Sutorik said. “This year due to the pandemic, there are more virtual showroom product lines being presented. Seasonal hiring gears up in summer and normally is complete early October. Thankfully Bronner’s is blessed with a great staff, and many return seasonally year after year. Bronner’s catalog production cycle starts early in the year and the process of photography, copywriting and layout is all done internally. Printing takes place in August and the first mailings go out in September.”

All the hard works leads into the season of giving — and Bronner’s takes that spirit to heart through the Wallace and Irene Bronner Family Charitable Foundation. Sutorik said her parents established the organization as a way to share the blessings that have been bestowed upon the Bronner family.

“Approximately 500 causes are supported, the majority of which are humanitarian and religious,” she said. “Most of the gifting is done in the fourth quarter around Thanksgiving time. We’re also able to share the spirit of the foundation with our staff by double-matching funds for certain contributions our staff chooses to donate toward food for the hungry seasonally.”

There may not be one specific aspect of her job that Sutorik can pinpoint as the best part of her work. Instead, it’s more of an overall appreciation that she summarized as this:

“The opportunity of spreading the true joy of Christmas year-round, and being able to work with a wonderful team of creative and customer-centric people,” she said.

Get Searching: Each of the approximately 300 decorated Christmas trees at Bronner’s has a Nativity ornament somewhere on its branches.

Ornamental Originals: About half of the ornaments sold at Bronner’s are the store’s own exclusive designs.

Break out the Checkbook: At the original store in the early days of Bronner’s the lights and music were turned off between customers to save on electricity. Now the electric bill at Bronner’s is about $1,200 a day.