It’s All About the Pie

While many cooks and bakers have notebooks full of recipes that have been handed down from generation to generation, this former Saginaw postal worker took it one step further, turning her memories and recipes into two best-selling cookbooks.
Pati LaLonde

Since she was 7 or 8 years old, Patty Pinner has known how much family life is intertwined with food—especially during the holidays. “My cousins and I remember pies from the past,” she says. “I think pies bring people together. All food does really. But there is something about a good, tender, flaky piecrust encasing a colorful, wonderful filling. I just love pies. I honestly do.”

When you get down to it, it’s not just the pies, but the memories that go along with them, from the first bite to the last.

While many cooks and bakers have notebooks full of recipes that have been handed down from generation to generation, this former Saginaw postal worker took it one step further, turning her memories and recipes into two best-selling cookbooks.

It all started when Pinner decided to make a present of family recipes for her Aunt Margie Moore. “I was thinking it was something big,” says the Saginaw resident, “putting down a collection of recipes from my mom, grandma, aunt, and great aunts. Something told me to publish it, and I sent it off.”

After sending it off, Pinner wasn’t sure she had done the right thing. “I was thinking, how stupid,” she says, laughing. “Who is going to be enthused about a book of country desserts? Lo and behold, an agent wrote to tell me they loved the cookbook and the stories.”

That first cookbook, Sweets: Soul Food Desserts and Memories, was an instant hit across the country, and Pinner was back at it, working on her next release. Sweety Pies: An Uncommon Collection of Womanish Observations with Pie was a success as well. Both are still available online for purchase.

Pinner is now at work on a brand-new cookbook filled with sweet recipes for breakfast and brunch. The tentative release day is early 2016 from Agate Publishing Inc.

In the meantime, here are three of her favorites. 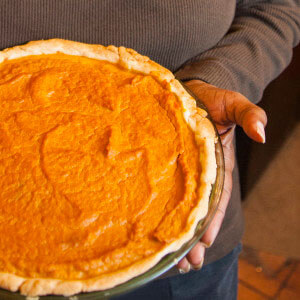 Wash the whole sweet potatoes; drain. Place in a large pot with cold water to cover by 2 inches. Bring the water to a boil over medium heat, and cook until the potatoes are tender, 30 to 40 minutes. (A fork should pierce the potatoes easily but they should not fall apart.) When the potatoes are done, drain and cool them.

Preheat the oven to 375°. Prepare the pastry for a 9-inch single-crust pie. Set it aside.

When the potatoes are cool enough to handle, peel and mash them in the large bowl of an electric mixer. Add the melted butter, corn syrup, and sugar. Beat on medium speed. Discard the long, stringy fibers that collect around the electric beaters as you beat the filling. In the end, you want a smooth, string-free filling. Add the eggs one at a time. Beat well after each addition. Pour in the buttermilk. Add the nutmeg, cinnamon, allspice, vanilla extract, and salt. Beat until the filling is smooth. Pour the filling into the prepared pie crust. Bake for 35 to 40 minutes, or until a toothpick inserted into the center comes out clean. Remove from the oven and cool completely on a wire rack. Garnish with whipped cream. 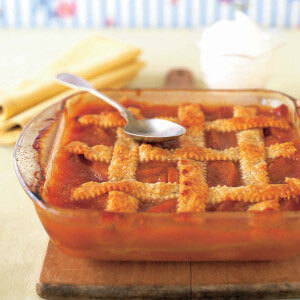 Lightly butter an 8-inch square glass dish. Set it aside.

Prepare the pastry for a double-crust pie. Set it aside.

Combine the peaches, sugar, flour, cinnamon, nutmeg, and allspice in a 4-quart Dutch oven. Allow the mixture to sit until the dry ingredients are dissolved and a syrup forms, about 15 minutes. Bring the peach mixture to a boil over medium heat. Decrease the heat to low and cook until the peaches are tender, about 10 minutes. Remove the mixture from the heat and add the butter and vanilla extract.

Roll out half of the pie pastry, then cut it into an 8-inch square. Spoon half of the peach mixture into the prepared dish. Cover the mixture with the pastry square. Bake 12 to 14 minutes, or until lightly browned. Take the dish out of the oven and spoon the remaining peach mixture over the baked pastry. Roll out the remaining pastry, then cut it into strips about an inch wide. Arrange the strips in a loose lattice pattern over the peach mixture. Bake an additional 15 to 20 minutes, or until browned. Remove from the oven. Serve warm. 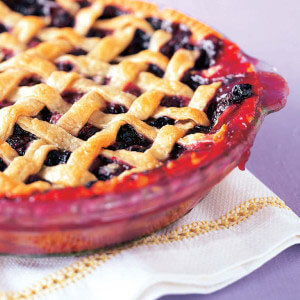 Prepare the pastry for a double-crust pie. Line the bottom and the sides of a 9-inch pie pan with the bottom crust. Set it aside.

Place the blueberries in a large bowl. Sprinkle them with the lemon juice. In another bowl, combine the sugar, lemon zest, flour, and cinnamon. Sprinkle the sugar mixture on the blueberries. Toss the berries gently, until the flour mixture has been evenly distributed. Pour the blueberry mixture into the crust. Dot with the butter. Place the second crust on top of the filling, trim and fold the edges of the top crust under the edges of the bottom crust, then flute the edges and cut slits in several places on top of crust. Or, if you prefer, cut the remaining pie crust into 10 ½-inch-wide strips and arrange the strips in a lattice pattern over the pie filling. Bake for about 10 minutes. Decrease the heat to 350° and bake until the crust is light golden brown, about 30 to 40 minutes. Remove from the oven and cool completely on a wire rack before serving.

Note from Patty: Blueberries have such a gorgeous deep-blue color that I think it’s much nicer to display them under a pretty lattice top than to hide them under a dome of crust.