Despite being one of the most gifted athletes to ever emerge from the state of Michigan, the name Bill Watson is not widely recognized outside of Saginaw.
Andrea Deering

Despite being one of the most gifted athletes to ever emerge from the state of Michigan, the name Bill Watson is not widely recognized outside of Saginaw.

Watson was truly a man amongst boys in the late 1930s and early 1940s when he developed into the premier track and field athlete in the nation. He was also a trailblazer, becoming the first African-American selected as captain of any athletic team at the University of Michigan, and later became a highly decorated Detroit police officer. 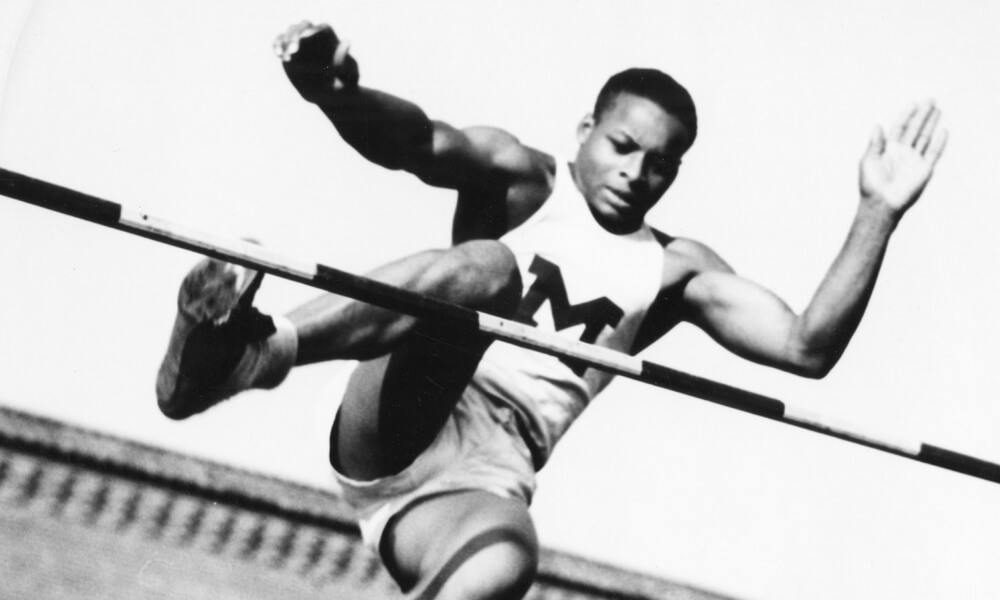 William Delouis Watson was born December 18, 1916, in Boley, Okla., and the son of a dressmaker. He moved with his mother, Sofrona, and family to Saginaw at the age of 7. Watson was discovered in a gym class at Saginaw High School by coach Chester R. Stackhouse, who had 50 boys high jumping a cross bar. Watson bounced over it with several feet to spare.

Watson was called “Big Bill,” as the 6-foot, 200-pounder possessed an extremely muscular physique. He played football and basketball for the Saginaw High Trojans, but was best known for his track and field exploits. While competing for Saginaw High, he set shot put, broad jump, and high jump records at the school. His toss of 53-10 ¾ in the shot put established a new state Class A meet record.

After graduating from Saginaw High School in 1935, Watson enrolled at the University of Michigan where he competed in track under famed coach Charles Hoyt. Working his way through college by waiting tables, his first year of competition came as a sophomore in 1937. At the Big Ten championship meet he won the long jump, shot put, and discus, while also excelling in sprints and high hurdles. His dominant efforts helped Michigan win the conference championship. Watson was referred to as “a one-man track team,” because on several occasions he outscored the opposition’s entire team. His 48 points in one track meet established a Big Ten scoring record.

Watson would go on to win a total of 12 individual Big Ten conference championships, including three consecutive first place finishes (1937-39) in the long jump, discus, and shot put—setting several University of Michigan and Big Ten records, including a discus record of 160-10 ¾.

After concluding his collegiate career in 1939, he took a job as the private secretary and assistant trainer to heavyweight boxing champion Joe Louis. Watson also began training for the 1940 Summer Olympics.

On August 21, 1939, less than two weeks before the German invasion of Poland, Time magazine predicted that Watson would be America’s 1940 Olympic hero. With his talent in numerous track and field events, many believed Watson would establish a new world decathlon record in the Olympics.

At the time, Watson was widely considered the best all-around track athlete in the United States, surpassing Jesse Owens, the hero of the 1936 Olympic Games. Along with nabbing Big Ten titles in the shot put, broad jump, and discus three years in a row, he also cleared the high jump at 6-5 ¾, ran the 100-yard dash in 10.1 seconds, and the 440-yard dash in 55 seconds flat.

The 1940 Summer Olympics, officially known as the Games of the XII Olympiad, were originally scheduled to be held in Tokyo. Tokyo was stripped of its host status by the International Olympic Committee (IOC) after the government of Japan abandoned its support for the 1940 Games in July 1938. The IOC then awarded the games to Helsinki, the runner-up in the original bidding process. The games were suspended indefinitely following the outbreak of World War II, and did not resume until the London Games of 1948.

Watson died March 3, 1973, at the age of 56. He was posthumously inducted into the University of Michigan’s Athletic Hall of Honor in 1982, and inducted into the Saginaw County Sports Hall of Fame during its inaugural induction banquet in 2002.