Volunteers have dedicated over six decades to the artful preservation and restoration of the Italian villa-style garden at the Saginaw Art Museum at 1126 North Michigan Avenue in Saginaw.
Nancy Sajdak Manning

Volunteers have dedicated over six decades to the artful preservation and restoration of the Italian villa-style garden at the Saginaw Art Museum at 1126 North Michigan Avenue in Saginaw. The formal garden is part of the near one-acre 1904 Georgian Revival Italian villa-style mansion/garden originally created for Clark Lombard Ring (1862-1933) and his wife, Elizabeth (Lizzie) Palmer Merrill (1862-1912), both members of prominent Saginaw lumber families. The family-donated (1947), now state-registered mansion/garden was designed by New York artist and architect Charles Adams Platt.

Inside the Ring Mansion, its stately foyer displays artist Irving Ramsay Wiles’ (1861-1948) portrait of Lizzie Ring posed by a bouquet of lush white peonies flecked with crimson (Paeonia var. Festiva Maxima), still grown in the garden. The rooms, décor, and pastel wall colors once echoed in the garden design have been altered for museum use.

Charles Adams Platt (1861-1933), born in Manhattan to a wealthy family, dedicated his life to creating beauty. Platt achieved national prominence for consecutive works as an etcher, landscape painter, landscape and country home designer for America’s wealthy, and post-World War I commercial architecture and institutional projects. His travels to Italy inspired his fascination with Italian gardens, which he later adapted to modern needs in America’s changing rural to urban/industrial climate. Platt’s 1894 publication of the influential Italian Gardens, the first of its kind in English, established him as the leading specialist in formal garden revival.

When Platt designed the Ring Mansion and garden, interest in gardening was growing in America, and Italian villa-style country homes were gaining popularity among the wealthy. The design trend promoted in Platt’s Italian Gardens was expanded upon by authors A. Holland Forbes (1902) and Edith Wharton (1904) and discussed in other publications by gardening specialists including Mrs. Francis King of Alma, Michigan.

In Italian Gardens, Platt explains that in the Italian sense, “villa” implies that “all the formal parts of the grounds [are] arranged in direct relation to the house, the house itself being as much a part of it as the garden or the grove.”

The garden is “designed as another apartment, the terraces and groves still others, where one might walk about and find a place suitable to the hour of the day and feeling of the moment, and still be in that sacred portion of the globe dedicated to one’s self.”

Local historian Tom Trombley explains that the Rings’ home and garden contained all the elements of a classic villa: house, pavilion, terrace, formal flower garden, bosco (woods), and fountain. As was typical, Platt used sculpture, furniture, painting, and tapestry to complement the architecture. 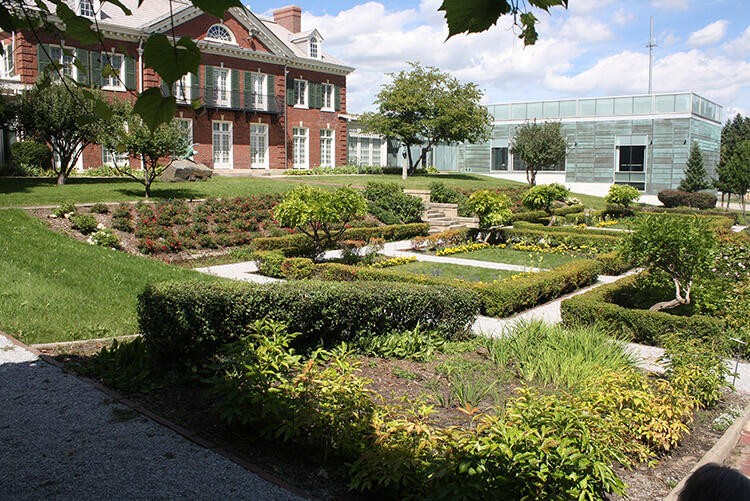 In Platt’s Italian Gardens, he writes, “The gardens [in Italy] to-day have all passed through a variety of changes. Some of them have gone almost to ruin…. However, in almost all of them there is something of the best time…which has been allowed to remain.”

And such is the case with the Rings’ backyard garden, which has naturally aged and undergone various ownership and maintenance since its first two full-time gardeners. Today, Platt’s formal garden design with 14 planting areas continues to be enjoyed in the garden’s sunny open spaces, cooler shaded ones, varying light and shadows, stony pathways, manicured lawns, and seasonal colors.

An overgrown, twisting willow bears witness to the once-cropped hedge of willows that shielded the Rings from a view of the railroad tracks.

The artful spirits of Platt and the Rings linger among modern garden additions such as easier-care ‘Knock Out’ roses covering the broad terrace ridge slope descending from the vastly windowed mansion into the garden. Platt’s signature barberry hedges (berberis thunbergii), largely planted during the Rings’ lifetimes, surround several garden areas. Broad stone pathways remain for two or more to walk together. A restored water fountain remains centered near the back, by original wood and broad-spindled fencing. Wild grape vines (vitis riparia) on the restored pavilion (central right edge) were transplanted to replace those specified on original plans. The restored gardeners’ tool building (central left edge) remains.

Today’s museum-funded massive annual and perennial plantings are chosen according to funding, availability, maintenance ability, and nature and wildlife challenges—and an attempt to preserve main original colors of yellow, blue, and white.

Special thanks to Thomas Trombley, Janie Gugino, and Shelley Whitehead for historical/gardening assistance.