West Side, East Side

On June 28, 2014, the city of Saginaw will celebrate the 125th anniversary of Michigan Legislature’s passage of Act 455 that united Saginaw City and East Saginaw into a single city, offering greater opportunities for progress at the end of the lumbering era.
Nancy Sajdak Manning

On June 28, 2014, the city of Saginaw will celebrate the 125th anniversary of Michigan Legislature’s passage of Act 455 that united Saginaw City and East Saginaw into a single city, offering greater opportunities for progress at the end of the lumbering era.

The merged city of Saginaw, located on the east and west shores of the Saginaw River, developed following Native American settlement, the War of 1812, the 1819 Treaty of Saginaw, and the establishment of broad Saginaw Township (1830), Saginaw County (1835), and the state of Michigan (1837).

Pioneer settlement was first made in 1816 by white fur trader Louis Campau, who constructed a trading post/home on the west side of the Saginaw River. Campau’s 1820 business expansion on the river’s east side was rebuked by the Chippewas.

Early access to Saginaw was primarily by water. In 1822, after treaties with the Native Americans cleared the way for titled land in Michigan, a rough military road was cut through the woods, and Fort Saginaw was established on the west side of the river (in the vicinity of Court and Hamilton streets). Two companies of U.S. troops (120 men) were stationed there for settlers’ safety.

In 1822, James McCloskey and Captain John Farley purchased 136 acres, which were surveyed by John Mullett, who platted a portion named the “Town of Sagana.” This included Campau’s first trading post and the council house used for negotiating the 1819 Saginaw Treaty.

By late 1823, after extremely harsh seasons and illnesses causing two deaths, troops received permission to leave Fort Saginaw. Samuel W. Dexter purchased the fort area in 1824 and platted out the subsequent town of “Saganaw City” in December 1830. Few lots were purchased, however, and settlement efforts lapsed. 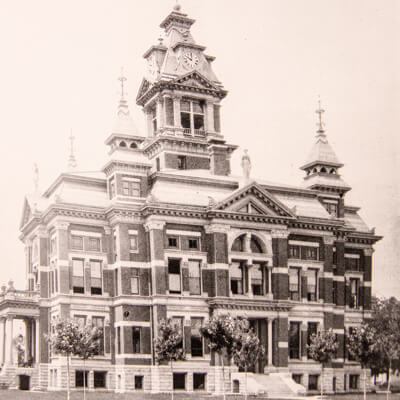 In the early 1820s, Dr. Charles Little (1776-1841) and his son, Norman, were among early land speculators who visited the Saginaw Valley. Dr. Little purchased several hundred acres of land on both sides of the Saginaw River. In 1836, Norman, age 31, returned to Saginaw City, backed by investors, to settle and build the city his father had imagined.
When Michigan finally achieved statehood on January 26, 1837, the state census recorded 920 non-Indians in Saginaw County, and farming was replacing fur trading as the state’s primary industry. Little created a new platting of Saginaw City that contained 408 blocks and embraced all plats previously drawn. His paper city map dated February 1, 1837, was printed and promoted intensely.

Little’s development of Saginaw City was soon halted by the Panic of 1837 that resulted in bank failures and a half-decade national depression. In 1841, Little and his associates were forced to sell all their land holdings on both sides of the river at a great loss. Soon after, Little returned East to seek further financial backing.

In 1850, as the lumbering boom drew near, Saginaw City’s population was about 900. Little had recently returned to resume development of Saginaw City with backing from James Hoyt & Company, New York. But, Little was unable to reasonably re-purchase land, so he purchased 2,400 acres of highly undesirable east bank swampland to create East Saginaw.

In 1848, Little requested and received extremely cynical approval from the Michigan Legislature to build a 32-mile plank toll road from East Saginaw to Flint to supplement limiting river travel. The road, successfully completed in 1851, enabled travel by daily stage coaches and increased communication. Little moved from Saginaw City to East Saginaw in 1851. East Saginaw then grew rapidly and more prosperously than Saginaw City, and persisting rivalries emerged.
City charters were granted to Saginaw City in 1857 and to East Saginaw in 1859. By then, the lumber boom was starting. Trade in the cities involved fur, fish, lumber, lath, shingles, staves, and shipping, plus general trade. Unfortunately, at this pinnacle time, Little tragically drowned in November 1859. The Hoyts and others continued the development of East Saginaw. 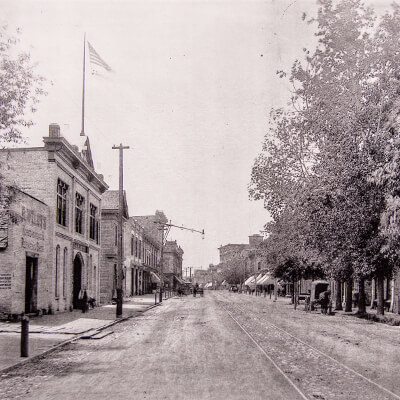 Despite ongoing setbacks including the Civil War, which involved around 2,000 Saginaw County men, plus local fires, flooding, and natural disasters, the two cities enjoyed about three lucrative decades of lumbering. Farming advanced, and the salt production industry that began around 1860 added to the economy. The lumbering industry peaked in 1882. But, by the mid-1880s, Saginaw Valley’s forests were nearly exhausted.

Consolidation
By the end of Saginaw Valley’s lumbering era, the population of both cities was declining. Recurrent consolidation discussions remained unproductive. Many in both cities strongly opposed consolidation, but several costly municipal services were being duplicated in the cities, and modernization was developing at different rates and causing more friction. Some leaders in both cities met again—this time with a determined goal of consolidation.

On June 28, 1889, the Michigan Legislature’s passage of Act 455 (effective March 1890) finally united the two cities with a joint 1890 population of 46,322, making it Michigan’s third largest city (after Detroit and Grand Rapids). Some stipulations of the act specified that the county courthouse remain on the west side and the city hall be built on the east side. Additionally, three new bridges were to be built at Court, Sixth, and Center streets to join existing ones at Mackinaw Road, Bristol Street, Genesee Road, and Johnson Street.

Parliamentary Procedure Not to be Found

A mix of chaos and business occurred during maiden meetings of the Saginaw City Council (known then as the Common Council) after Michigan Legislature enacted a merger of East Saginaw and Saginaw City in June 1889.

Records show scant evidence of what one may expect would have been territorial east/west debates, although issues certainly did exist. Many of the territorial disputes were resolved by compromise, such as mapping construction of City Hall midway between the two downtowns.

The disarray, rather, was rooted in the uncommonly large size of the governing body: 30 aldermen, plus Mayor George Weadock.

The original council began with a precaution from Weadock to show due diligence, rather than rushing, followed by routine matters such as citizen petitions for street lights, sidewalks, and water mains.

Chaos first began in setting salaries for various administrators and department heads. After motions were made to set pay at fixed amounts, the more liberal-minded members were pushing amendments for raises—$1,200 for the “director of the poor,” for example, instead of $900. Because the amendments directly contradicted the original motions, they should have been deemed in violation of Robert’s Rules. But Weadock failed to act, and a flurry of votes ensued by such margins as 18 – 12 and 16 – 14, with most of the proposed increases failing.

Perhaps a positive sign is that the records indicate no apparent voting blocs. Members simply seemed to vote willy-nilly, and Weadock—no “machine boss”—lost as often as he won.

Records at Hoyt Library in Saginaw don’t indicate the level of public audience attendance. Participants would have arrived by horseback or trolley. Historian Tom Mudd says that following customs of the time, food and libations may well have been shared while proceedings transpired.

Contrary to some beliefs, there weren’t many lumberjacks at the council table. The white pine lumber industry was entering its final days at the close of the 19th century, and the goal of new economic development was a key reason for the merger. The original city council was comprised mostly of businessmen and professionals. Weadock, an East Side attorney, had defeated Lyman Bliss, a West Side physician, in a mayoral election that was relatively free of flack.
Council business eventually prevailed, but voters decided the 31-member council was too big, and curtailed the size in 1913.